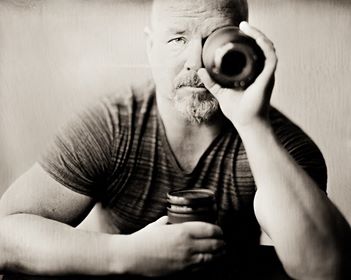 Clint Saunders has a Masters in Fine Arts from the Academy of Art University San Francisco. Aside from his passion for creating fine art images, he also began working as a professional photographer in 1999, and has taught college courses and seminars in photography and art since 2003.

“Photography has traditionally been used for its mimetic nature – for capturing what already exists. As an artist, I use a camera like a pencil to create new environments. Using my original photographs as elements in a montage, I distort, manipulate and reinterpret shapes, colors, and light, to open new vistas. Through this process, I visually communicate the imagery and concepts I develop in my mind.”
“It is an absolute privilege to be able to photograph Cherryn’s amazing work. I always look forward to our photo sessions to see her new work and talk about art.”

Come Visit Us At:

This function has been disabled for Artsy Aussie.